Italy is home to so much art (over half the world’s artistic treasures can be found in this relatively small country, according to UNESCO estimates) that it is easy to become inured to this exceptional patrimony, displayed everywhere from world-class museums to tiny country chapels.

Many of these works take on a particularly moving significance when viewed in a specific context, be it a poignant location or a relevant time of year. This is why we love to revisit some of the best Nativity-related paintings in Italy during the Christmas season, when they become more than just another masterpiece and instead a reminder of the message of joy and peace that this holiday represents to millions of Italians (and visitors to Italy).

Here are a few of our favorites, depicting the most important moments in the Christmas story: 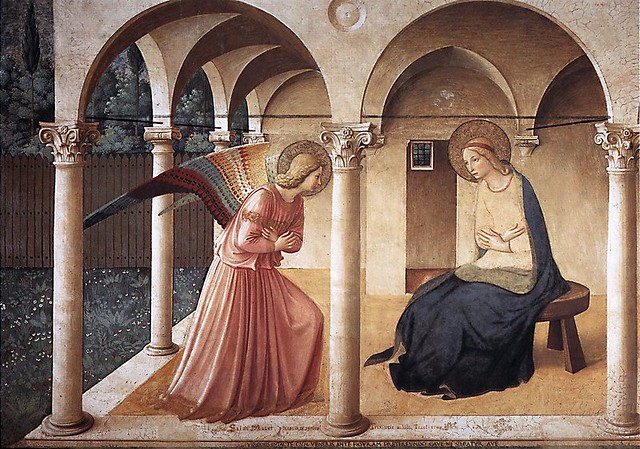 (Photo by carulmare via Flickr)
Fra Angelico, one of the most important painters of the 15th century with a style built on the innovations introduced by Giotto, painted a number of Annunciation scenes during his life, but this simple and intimate version is perhaps his most beloved. Where most depictions of the Annunciation (a popular subject during the Renaissance) can be overwrought and melodramatic, this quiet, muted fresco is instead moving for just the opposite reason. Mary is humble and already in a protective posture for her unborn child, Gabriel is breaking the news with a gentleness that belies his angelic importance. The mood perfectly captures a private moment, stripped of the traditional stagey iconography, between an unbelieving young woman and a kind messenger, sent with news both joyful and troubling. 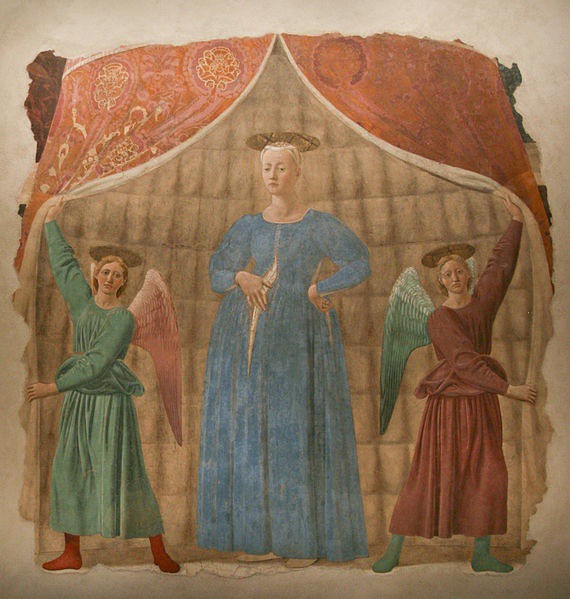 La Madonna del Parto is one of Piero della Francesca’s most important works, though he painted this masterful fresco for a tiny country chapel outside the village of Monterchi. The fresco has been moved twice since its completion, and is now in a small municipal museum. This exquisite portrait of Mary as mother-to-be had been long loved by local women hoping to become with child by more traditional methods, and over the centuries the work has become a pilgrimage destination for many who come to pray before the painting of a pregnant Mary flanked by two angels in the hopes that the Madonna will assist them in their quest to have children.

Annunciation to the Shepherds by Taddeo Gaddi (Santa Croce, Florence)


Though many of the works depicting the Nativity are sumptuous and opulent, the most moving paintings tend to be those which tell the story of Christ’s birth from a more humble and human perspective. Gaddi’s lovely Annunciation is captivating because it is the exact opposite of most ornate Nativity scenes, showing the viewer the moment that angels announce the arrival of Jesus to two rough shepherds, one still rousing himself from under his cape, surrounded by a barren landscape and bewildered, sleepy animals. Taken from a citation by Luke, who recorded that an angel woke the shepherds tending their flocks outside Bethlehem with the joyful news, this scene makes viewers smile in recognition at the shepherd’s stunned expression.

Nativity and Adoration of the Shepherds by Bartolo di Fredi (Vatican Museums, Rome) 
This work by Bartolo di Fredi is from roughly the same period, and though Gaddi’s scene is frescoed and austerely plain and di Fredi’s is painted on a wooden panel and decidedly more ornate in color and composition, you can see similarities in the styles and expressions. Long before the VIP guests arrived, the nearby shepherds came to pay their respects to the newborn, and this scene perfectly captures those first moments when the babe was swaddled in rags, warmed by an ass and ox, and worshipped by common peasants. Here you can almost hear “Silent Night” in the background, whereas “Joy to the World” is more suited to the later Adoration of the Magi. 
All the quiet intimacy and rough realism of the previous works are turned on their heads in this tumultuous and colorful composition, crowded with richly dressed magi and dignitaries. Mary maintains her calm air at the center, but she is surrounded by men and angels who are ready to get the adoration party started. Il Ghirlandaio, student of Fra Angelico, was the founder of the Ghirlandaio workshop which became one of the most important artistic dynasties of Renaissance Florence (Michelangelo famously apprenticed here). The school’s style is perfectly represented in this Adoration, with its fine details, dynamic yet harmonious composition, use of color, and realistic natural background. All of this combines in a visual fanfare suitably joyous and celebratory for this moment of the Nativity.