Italy is a land of holidays, first among them feast days dedicated to a number of patron saints. Each town in Italy holds a special allegiance to a particular saint, and commemorates the anniversary of his or her death with a mixture of solemn Masses and processions, and festive fairs and fireworks. 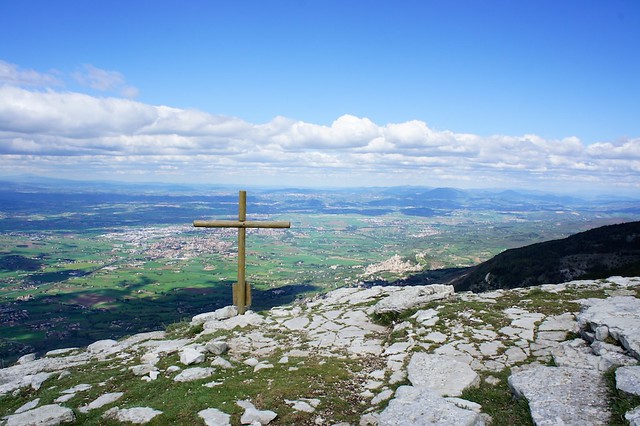 Of all the saints’ days in Italy, one of the most widely celebrated is the Feast Day of Saint Francis, which falls on October 4th. Patron saint of Italy (though not, oddly, of his home town of Assisi), Saint Francis is one of the most beloved of all historic figures in the Catholic church, and the current Pope’s choice of Francis as his papal name has only added to this humble figure’s worldwide popularity. He’s especially noted for his inclusion of animals in his preaching and many churches worldwide offer a blessing of the animals in honor of his feast day.
Read More...

Walk in the Paths of St. Francis and St. Clare in Assisi Like main squares in towns all around Italy, Assisi’s Piazza del Comune is a microcosm of the entire city. The façade of a first-century Roman temple opens into a 15th-century Catholic church. The modern day square lies directly atop the Roman forum, the entrance to which is next to a 20th-century pastry shop housed in a Renaissance pharmacy framed by period sculptures. The town hall rubs shoulders with the Roman brothel.

Assisi revolves not only around the landmarks of the life of its most famous figures, St. Francis and St. Clare, but also what they stood for: finding peace in simplicity amidst a decadent world. The Basilicas of St. Francis and St. Clare

Lying at opposite ends of the sloping city, roughly equidistant from the main square, the basilicas of St. Francis and St. Clare balance each other in stone as the saints balanced each other in life. St. Clare and St. Francis form two halves of the same whole, the female yin to the male yang, the nuns that complete the work of the friars.

At the lower end of the city, the Basilica of St. Francis, holding the tomb of the saint, has drawn pilgrims since it was first constructed in 1228 - another church was even constructed on top of it to accommodate the adoration and reverence the saint drew. Among those who have come to Assisi, few have left a more lasting mark than the artists who adorned the walls, including Cimabue, Giotto, and Simone Martini.

For medieval Christians, many of whom were illiterate, these illustrations were the main means of understanding the life and works of the saint. And as they tell the story of St. Francis, the frescos also speak to us of the origin of modern painting, which many art historians believe lie within Giotto’s cycle of St. Francis’ life in the upper church. Meanwhile, at the upper end of the city, the Basilica of St. Clare dates back to 1260 and preserves not only the remains of St. Clare, but also many relics of her and St. Francis’ lives. But none are more revered than the Cross of St. Damien, through which it is said that God first spoke to St. Francis.

The cross originally lived in the tiny, run-down church of St. Damien just outside Assisi. In the early days of his renouncement of worldly goods, the wooden figure of Jesus famously whispered to St. Francis: “Go and repair my house, which, as you see, is falling into ruin.”

And so it was here that St. Clare led her cloistered life. You can see where she prayed, where she slept, and where she performed her miracles. The deep peace present for the first devotees of St. Francis and St. Clare resonates in the walls even now. And after a guided walk through Assisi and its countryside, with the collected intentions of 800 hundred years of pilgrims, it is hard not to feel at peace yourself.