One of the things we love best about our business is having the opportunity—the requirement, really—to travel to Italy often and stay for nice long spells. We usually visit the Bel Paese a few times a year for periods ranging from a short couple of weeks to a long, lovely few months, and the timing of our trips vary depending upon what new area we are bent on exploring and sharing with our travelers.

However, there is one annual trip that is a special favorite, and that we very rarely skip: spending the spring holidays (including Easter and--on fortuitous calendar years--the two national holidays falling on April 25th and May 1st) at our home-away-from-home in Umbria, Italy’s serene, hilltown-dotted central region. 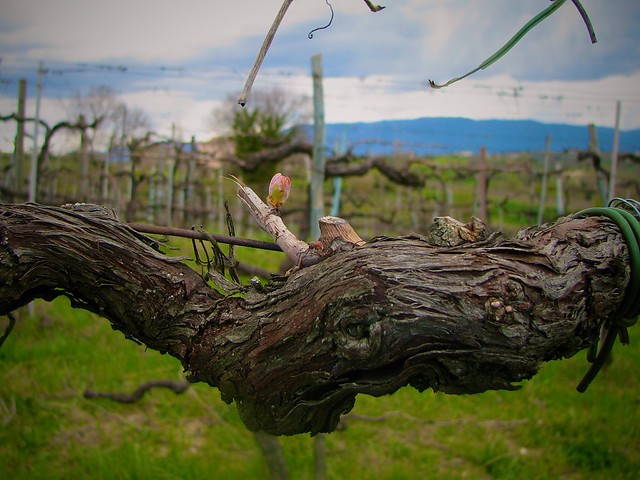 There are a number of things we love about the Easter holidays--which are rivaled in importance only by Christmas in this historically and predominantly Catholic country—in Umbria, which are perhaps a reflection of the best of Italian culture in general:

Religious holidays in Umbria—indeed, in most of Italy--have retained a solemn tone, not yet having fallen fully victim to the commercialism that has crept into Easter and Christmas seasons in many other countries. The events leading up to Pasqua (or Easter Sunday) during la Settimana Santa (or Holy Week) are marked by an authentically spiritual atmosphere that can be moving regardless of one’s faith.

Tweetable: One of our favorite times to visit Italy is during the Easter holidays, marked by faith, food, and family.

La Settimana Santa is ushered in with Domenica delle Palme (Palm Sunday), when the faithful are given blessed palm fronds (or, more often in olive grove-covered Umbria, olive branches) to commemorate Jesus’s triumphant entry into Jerusalem, when He was greeted with a crowd of followers waving palm fronds in His honor. Most Umbrians keep these for the entire year, tucked into their home’s crucifix or icon. 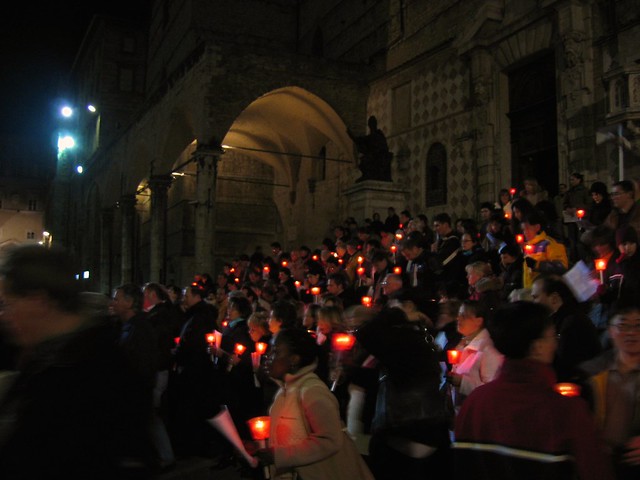 On Venerdì Santo (Good Friday), many towns stage La Processione di Cristo Morto or La Via Crucis. The first begins with sunset Mass in the town’s parish church, which ends with a procession of parishioners, clergy, and cloaked and hooded religious fraternity members carrying a statue of the dead Christ on a litter from the church through the town accompanied by prayers or singing. Umbria often evokes its Medieval history for these processions with flaming torches along the route and period garb for the participants. The second, La Via Crucis, is a reenactment of the most important episodes during Christ’s Passion using living, costumed “actors” (usually the local faithful). Many of these live Stations of the Cross can be quite elaborate and poignant, especially when staged in tiny Medieval villages as a backdrop

The Holy Week culminates on Easter Sunday, of course, with Easter Mass...preceded by a gathering of locals in the church square for a long gossip and followed by the traditional Easter lunch. 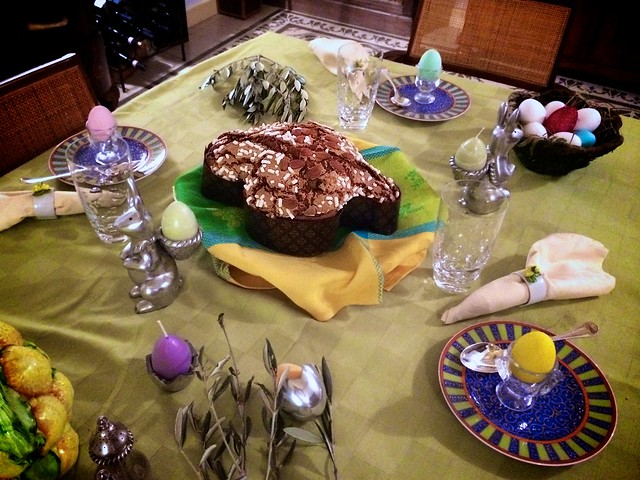 Easter, like most Italian holidays, focuses on food (especially in rural Umbria)....beginning with breakfast, when, in the most traditional households, the spread includes items blessed at a special Holy Saturday Mass, when the parish priest sprinkles holy water on baskets carefully packed with each family’s homemade wine, the year’s new salame or capocollo, “torta di Pasqua”(a savory cheese bread), and hard-boiled eggs. Other families feast on “La Colomba”, a dove-shaped cake flavored with candied orange peel and an almond sugar glaze, and chocolate from smashed Easter eggs (see below). 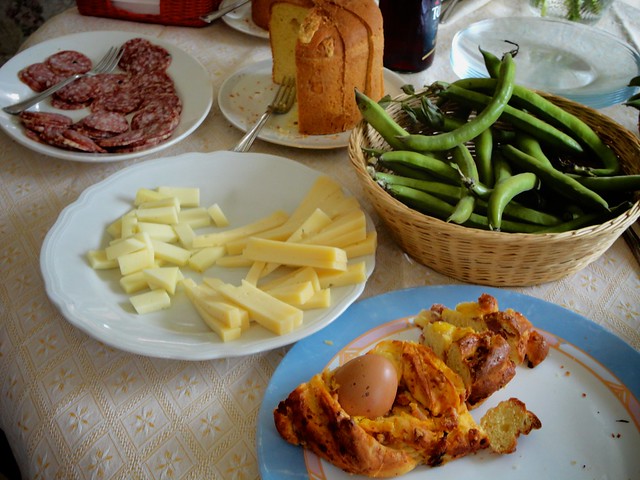 The main meal remains, of course, the iconic lunch, when extended family and friends gather around the table to indulge in hand-rolled tagliatelle tossed with wild asparagus, roasted lamb (or, Brian’s favorite, “coratella”, or lamb offal), artichokes, roasted new potatoes, and a second helping of colomba and chocolate.

Easter isn’t all solemnity in Umbria, of course (though it is all eating). One of the few concessions commercialism during this season is Italy’s extravagant uovo di Pasqua, or chocolate Easter egg. These hollow confectionary behemoths can measure up to six feet tall, and hide a “sorpresina” gift inside, ranging from toys and tchotchkes to jewelry or personalized gifts (which are placed inside the eggs by the local pasticceria on special order). Breaking open chocolate eggs to discover what is hidden inside is the focal point of Easter morning for kids and adults, and the chocolate shards are munched on for the better part of the following week. The highest quality eggs (and favors) are sold in artisan chocolate shops and bakeries, though Perugina eggs from Umbria’s historic chocolate factory dominate in these parts. 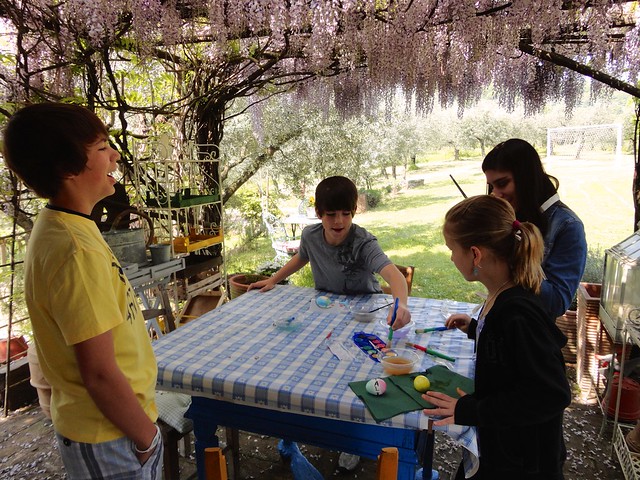 Easter is spent with friends and family, but the quality time continues for one more day as most of Umbria heads out of town for a countryside “gita”, or field trip, on Pasquetta. When in Rome, we do as the Romans (or better, as the Umbrians) and often head out ourselves with a gaggle of local friends to picnic and hike in one of Umbria’s many parks and nature reserves, armed with leftovers from our previous day’s Easter feast! 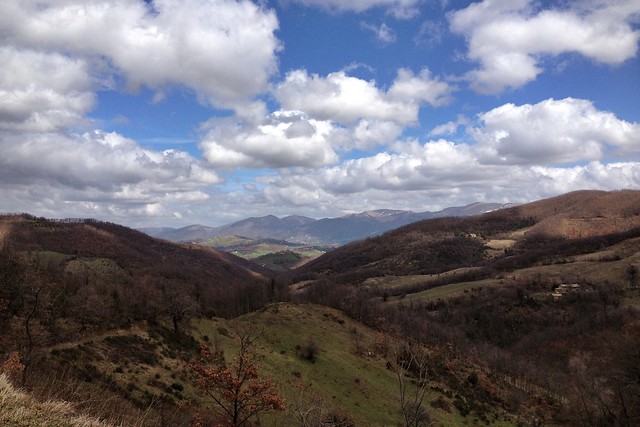